Back to the Colonial Age at The Hermitage 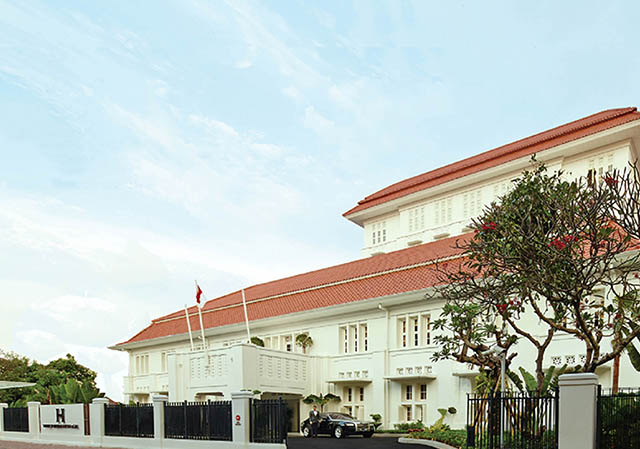 JAKARTA, KOMPAS.com – The magnificent building with colonial characteristics is alive again. This is The Hermitage, a hotel with new five-star services and facilities. Its strategic location, located on Jl. Cilacap No. 1, Menteng. Located not far from the Antique Market Jl. Surabaya. Since it was operational on 5 June, this building began to be visited by many people.

Classic impression is still felt but does not seem old. Maybe because of a lot of updates. Besides being repainted, the walls are filled with various paintings. There is also a photo of the building documentation before it is updated. Tracing its history, this building was built in the 1920s. “In 1923, this building was the telecommunications center of the colonial government. Then after independence, the Indonesian government was taken over, “said Karina Eva Poetry, PR Manager of The Hermitage Hotel, Menteng.

After being under control of the Indonesian government, this building had become the government office of the Department of Education and Teaching. Then soon, it also became the office of the Directorate General of Culture. Then in 1999, this building also briefly changed its function to become an educational institution, Bung Karno University (UBK). Unfortunately after that, this building was empty and did not receive attention. Therefore, in 2008 it was submitted by The Hermitage. The point, to be used as a hotel without leaving its historical heritage. Since then renovations have been carried out. Then this year it will operate under the auspices of Grace Leo Associates (GLA) Hotels, an international-scale hotel operator based in Paris.

Now The Hermitage, which is a member of The Leading Hotels of the World, which specializes in luxury properties, is starting to get busy. “Indeed, an update was made when we wanted to become a hotel, but we did not necessarily lose its historical value. This front building is an old building while the rear building for hotel rooms is a new building, “explained Karina. Executive Suite, one type of room at The Hermitage Hotel, Menteng-Jakarta (KOMPAS.com/SRI NOVIYANTI) The building he called the old building is the building where visitors enter. On the right side is the L’AAvenue restaurant. While entered on the left side there is a lounge and conference room in which there is a large collection of old books. Walking along this building, visitors are invited to reminisce with history. Documentation photos showing many photos of the President of the Republic of Indonesia, buildings of the colonial era and replicas of the Batavia floor plan of the same size as the original emblazoned on the high walls there. Each seemed to break down many stories in his day.

While the rooms, are in the new building located directly behind the original building. The new building has nine floors with 90 rooms and suites. The design of the building was deliberately made in such a way as to resemble the old building. Strong and classic impression is still felt.

The paint is white with a touch of brown from a wall lamp, still carrying the impression and colonial characteristics. Still in the new building, there is a Courtyard Café. This cafe is located in the middle of the ground floor with an open atmosphere. In this new building there is also a rooftop. Usually, visitors come to enjoy the Jakarta sky during the afternoon or night.

The first part is the living room which is also equipped with a work desk and a balcony. While the second room is a bedroom with LCD TV facilities, a bathroom with a bath tub and an inner balcony.

Previous Next
Close
Test Caption
Test Description goes like this